Quadrille bands were popular throughout Britain, Europe, North America, and elsewhere during the nineteenth century, the first ones appearing in Britain shortly after 1816, when Lady Jersey introduced the quadrille into British high society. A quadrille is a square dance performed by four couples and it comprises a series of between four and six contradanses, which were French court dances that owed their origin to English country dances from the seventeenth and eighteenth centuries.

Typical English dance evenings at the beginning of the nineteenth century, whether village dances or aristocratic balls, comprised reels, jigs, hornpipes, cotillions, and country dances, perhaps with the occasional strathspey or allemande included. The first half of the nineteenth century saw major changes as successive crazes for the waltz, the quadrille, the polka, and the schottische swept through not only fashionable society but also middle-class professionals and tradespeople, and ordinary country folk. All of these social classes tended to refer to the dances they held as balls. By the mid-century, the majority of the dances performed in a typical ball were waltzes, quadrilles, polkas, galops, and schottisches with a few country dances and other older dances included.

There was a tradition within the Yorkshire Dales and elsewhere that a ball would commence and finish with a country dance: the opening dance was usually The Triumph, but sometimes The Keel Row, while the closing dance was almost always Sir Roger de Coverley. However, this practice died out during the early twentieth century. The only twentieth century traditional dance musician in the Yorkshire Dales who was known to have had all three of these tunes in his repertoire was Sam Fawcett from Baldersdale.

Where groups, rather than solo musicians, played for balls and village dances in the seventeenth and eighteenth centuries, these groups did not have any generic name. By the nineteenth century, however, a fashion emerged to call these groups of musicians ‘quadrille bands’. Despite the popularity of other dances, terms such as ‘waltz band’, ‘polka band’, and ‘schottische band’ were almost never used.

Among the earliest quadrille bands in England were Mr. Paine’s Quadrille Band, which performed at a ball in Reading Town Hall in December 1818, and the Quadrille Band of the York Winter Assemblies, which was performing regularly in that city by 1819. The size and composition of quadrille bands varied according to the number of musicians available locally and the instruments they played, but bands in and around the Yorkshire Dales tended to have three or four members and to be led by a fiddle player.

Quadrille Bands in the Yorkshire Dales

The earliest quadrille bands known to have been operating in the Yorkshire Dales were Robert Forster’s Richmond Quadrille Band and William Wrigley’s Leyburn Quadrille Band. Five reports of balls in Richmond and one in Leyburn that appeared in the York Herald and the Yorkshire Gazette between 1835 and 1839 all refer to music being provided by the Richmond Quadrille Band, led by Robert Forster who died young in the summer of 1839. It is not known whether this band continued under another name after Forster’s death.

The first mention of Leyburn Quadrille Band was in a report of a dance at the King’s Head and Commercial Inn, Leyburn, for which the band played on 31 December 1839. No mention was made at this time of the composition of the band or the name of its leader, but an obituary written for Willie Wrigley, an impoverished road-mender, agricultural labourer, musician and instrument-maker, who died in August 1843, aged 74, described him as the leader of Leyburn Quadrille Band. Although the only mention of the Leyburn Quadrille Band during Wrigley’s lifetime occurred in 1839, it is likely that the band began playing several years earlier than that.

The term ‘quadrille band’ remained popular until the end of the nineteenth century, although by the 1880s some groups of musicians were beginning to call themselves string bands instead. With a few exceptions, the use of the name ‘quadrille band’ had died out by the First World War. The latest mentions in newspapers of quadrille bands in the Yorkshire Dales were in 1909, when John Sayer’s Quadrille Band from Kirkby Stephen played for a dance at Ravenstonedale and George Tomlinson’s Quadrille Band played for a Territorials’ Ball at Ingleton. Leyburn Quadrille Band took the accolade for longevity, having begun life sometime prior to 1839 and remaining in continuous existence until at least June 1906, when it played for a wedding reception at Constable Burton Hall.

The following table, compiled mainly from newspaper reports, provides an alphabetical list of the 39 quadrille bands known to have operated in and around the Yorkshire Dales, with their earliest and latest known dates, their location, and the number of dances, balls and other events at which they played for which reports have survived. This represents only a small percentage of the total number of engagements for which they will have played, and the figures are skewed socially, because the balls of the country gentry and the wealthier townsfolk were more likely to be reported in newspapers than the village dances of their social inferiors.

String Bands in the Yorkshire Dales

As the name ‘quadrille band’ went out of fashion in the late nineteenth century, many groups of musicians began to style themselves as ‘string bands’, even when the band contained some instruments that were not stringed, e.g. concertinas, melodeons, or brass instruments. The term ‘string band’ was in use in the British Isles as a descriptive term from the 1820s, if not earlier, but did not begin to appear in the names of bands until the 1840s. However, it was several decades later that it made its first appearance in the Yorkshire Dales. The first mention of the name ‘string band’ in a local newspaper was in 1881.

The following is a list of the 19 string bands known to have existed in the Yorkshire Dales together with their location and the dates between which they were known to have existed. Five or six of these bands were probably a rebranding of quadrille bands from the earlier list at a time when the ‘quadrille band’ name was going out of fashion. The last time a string band was reported to have played at an event in the Yorkshire Dales was in 1911, with the exception of the Langstrothdale String Band, which remained active until the 1930s. It is possible that others in the area survived the First World War, but access to more newspapers from the 1920s and 1930s would be needed to verify this. 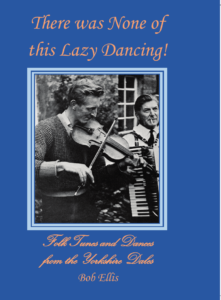 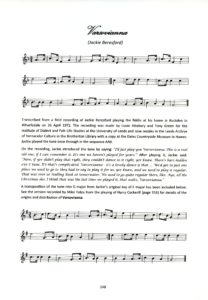 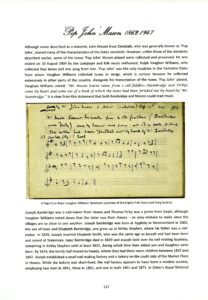